"Board Man Gets Titles" Billboard in Toronto 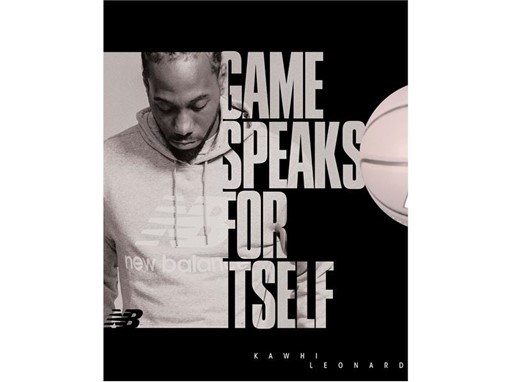 NEW BALANCE CELEBRATES KAWHI LEONARD WITH NEW BILLBOARD IN TORONTO
“Board Man Gets Titles”
Boston, MA (June 13, 2019) – New Balance Basketball celebrates Kawhi Leonard’s MVP performance and Toronto’s first-ever championship tonight by posting a new “Board Man Gets Titles” billboard in Toronto. Following the reveal of the “Fun Guy” billboard during the conference finals and most recently, the “The King of the North is Coming” billboard in Oakland, “Board Man Gets Titles” is now displayed in downtown Toronto and posted across @NewBalance social channels.
A limited-edition drop celebrating Toronto’s first-ever championship including a MADE Exclusives 990 silhouette, a MADE Exclusives 997 silhouette and custom tee shirts emblazoned with a new signature Kawhi Leonard tagline is coming soon on www.newbalance.com.
Leonard and his former teammates first started saying “board man gets paid” in high school and college to motivate each other to make it to the professional league. “It’s about working hard, outworking an opponent. Rebounds help win you games, big rebounds, offensive rebounds, limiting the team to one shot,” said Leonard during a press conference when asked to confirm the statement. Now winning his second championship title, “Board Man Gets Titles” is a callback to Leonard’s fearless determination to play professional basketball and celebrates his historic accomplishment in Toronto.
New Balance first announced Leonard’s partnership and debuted the OMN1S basketball shoe during All-Star Weekend in February. Since then, New Balance’s re-entry into basketball has been a co-authored story with athletes like Kawhi Leonard and Darius Bazley – supporting athletes who are setting trends, not following them. “New Balance Basketball has shared the same vision with Kawhi Leonard since the beginning. Game speaks for itself. His on-court performance and fearlessly independent mindset validates our position as a top global athletic brand,” said Patrick Cassidy, New Balance Global Director of Consumer Marketing.
For exclusive information on the next limited-edition drop celebrating Toronto’s first-ever championship, sign up at www.newbalance.com/basketball. Follow @NBHoops on Instagram and Twitter. Manufactured in the US for over 75 years and representing a limited portion of our US sales, New Balance MADE is a premium collection that contains a domestic value of 70% or greater.