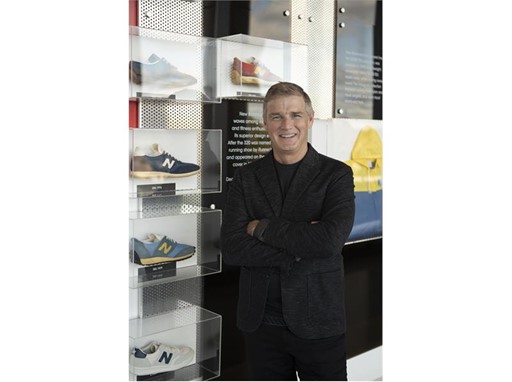 Boston, MA – October 30, 2018 – Boston-based global athletic leader New Balance Athletics, Inc. announced today that President & Chief Executive Officer Rob DeMartini will step down effective December 31, 2018 and New Balance veteran Joe Preston will assume the role.
“On behalf of the Davis Family and our 8,200 associates worldwide, we would like to thank Rob for his strong leadership in driving our aggressive growth during the last 12 years and his unwavering commitment to reflecting and maintaining our unique company culture,” says Jim and Anne Davis.
DeMartini led New Balance for 12 years and oversaw global growth of the athletic brand from $1.5 billion in 2007 to $4.2 billion in 2018.  During that time, New Balance regained its leadership in the specialty running category, expanded international sales to 65% from 30% and made significant strides in its apparel, retail and e-commerce business.  The company also had one of the highest growth rates in the industry in recent years, averaging an 11% compound annual growth rate.  DeMartini championed the brand’s long-standing commitment to owned manufacturing and played a key role in working with U.S. government and industry officials to secure implementation of Berry Amendment legislation for athletic footwear.
“New Balance is a very special company, built on the values of teamwork, integrity and total customer satisfaction established by Jim and Anne Davis,” says DeMartini. “It has truly been a privilege to add to the foundation our ownership established and I will forever be grateful for the warm welcome I was afforded by the Davis Family, our associates and industry partners when I was a newcomer to the world of footwear and apparel.”
Preston, currently Chief Commercial Officer, began his New Balance career in 1995 as Senior Product Manager, Running and Custom Products.  He was named Vice President, International, Asia/Pacific in 2002, and Vice President, International in 2005, and was promoted to Executive Vice President, International in January 2008.  He was later named to lead the brand’s Global Product, R&D and Sports Marketing.
“Over the past 23 years, Joe has demonstrated strong leadership skills, commitment to the business and the customers we serve, and a strong passion for building a culture that recognizes and rewards the value and contributions of each of our associates,” said Jim and Anne Davis.
“I’m honored and humbled to take on this role and want to thank Rob for his leadership over the past 12 years,” said Preston. “We have an incredible team of associates and partners around the globe and together we will drive even greater speed, agility and innovation in this modern age of retail and continue to build this iconic brand while strengthening our purpose-driven culture.”
“Joe is an experienced industry leader who knows our customers, partners and consumers well,” says DeMartini. “He is a talented executive who embraces the brand’s core values and is a great choice to lead New Balance into the future.”
DeMartini joined New Balance in May 2007 from Tyson Foods where he was Group Vice President, Consumer Products.  Prior to that, his career at Proctor & Gamble spanned more than 20 years, beginning in their Food & Beverage Division and including management roles with the Gillette Company, North American Snacks, and Millstone Coffee
About New Balance: New Balance, headquartered in Boston, MA has the following mission: Demonstrating responsible leadership, we build global brands that athletes are proud to wear, associates are proud to create and communities are proud to host. Manufactured in the U.S. for over 75 years and representing a limited portion of our U.S. sales, New Balance Made U.S. is a premium collection that contains a domestic value of 70% or greater. New Balance owns five factories in New England and one in Flimby, U.K. New Balance employs more than 8,000 associates around the globe, and in 2017 reported worldwide sales of $4 billion. To learn more about New Balance, please visit www.newbalance.com and for the latest press information please visit http://newbalance.newsmarket.com.
###