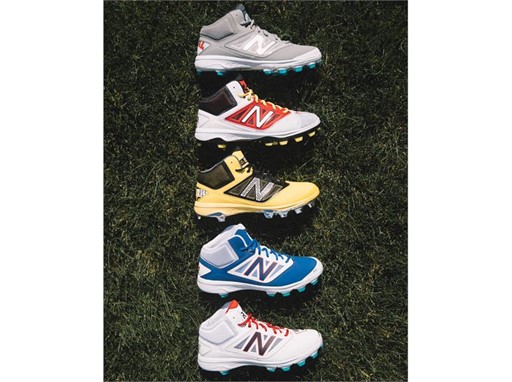 As the last few weeks of the regular baseball season begin, the inevitable is upon us: David Ortiz will say goodbye to the Sox as he enters retirement after the 2016 season. While Bostonians and beyond will celebrate his legacy for decades to come as the most clutch hitter in Red Sox history, Boston-based New Balance will make sure Team NB Athlete Big Papi goes out in style, as always: in each of his final four series in the 2016 season, he’ll wear custom New Balance baseball cleats inspired by each city: Baltimore, Tampa Bay, New York, and Toronto. For the final home game of the season on October 2, Papi will wear a fifth custom cleat in Boston Red Sox colors with the dates of all of his walk-off home runs printed on the toe.
Super fans of #34 can join in the celebration by snagging Made in USA lifestyle sneakers inspired by Papi’s on-field cleats. All shoes in the Walk-Off Pack will be available in limited quantities at newbalance.com/ortiz-walk-off-collection and at New Balance Boston (583 Boylston Street, Boston) with the exception of the Final Walk Off 998, which will be available exclusively at the Boylston Street store. Details about each cleat and the corresponding lifestyle shoe are below.
New Balance will also release a limited edition “Walk Off 34” tee that will be available for $30 in limited quantities on NewBalance.com and at New Balance Boston, and will also re-release the highly coveted Fenway Zante V2 on Monday, September 19th – which was designed with Red Sox fans in mind – in limited quantities on NB.com and the Boylston store.