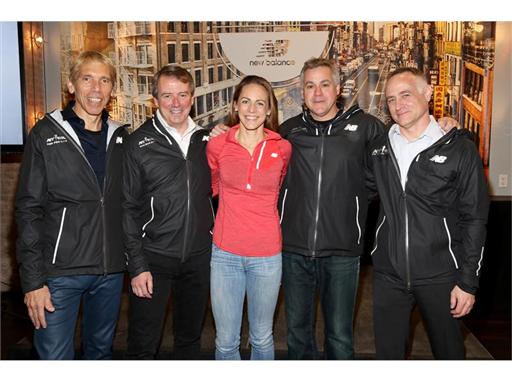 BOSTON, MA and NEW YORK, NY DECEMBER 8, 2015 – New Balance and New York Road Runners (NYRR) announced a new multi-year agreement today that features year-round engagements with NYRR events, programs and youth running initiatives. The new relationship, which will launch gradually in 2016 and reach full engagement in 2017, covers a wide range of areas including event sponsorship, youth programming, global licensing as well as e-commerce and retail rights for footwear and apparel. The alliance will bring together New Balance’s innovative athletic products and one of the world’s leading running organizations to serve the global running community in a new and inspiring way.

“New Balance and New York Road Runners share a commitment to quality, innovation and giving back to the communities they are a part of,” says Rob DeMartini, President and CEO of New Balance. “We are proud to join forces with an organization where we align on many core values and look forward to offering the best in New Balance gear to the global runners participating in NYRR events throughout the year.”

“This year-round alliance is a first in the category for New York Road Runners and was made possible by our unified vision of a world where people of all ages and abilities benefit from running,” said Michael Capiraso, President and CEO of New York Road Runners. “We’re excited to partner with New Balance on our continuing efforts to get kids moving in a fun and rewarding way while serving the global running community with world-class programming and innovative athletic products.”

As a highlight of the two organizations shared values and commitment to youth health and fitness, once the new NYRR running center opens, for every pair of New Balance shoes sold at the NYRR running center, NYRR and New Balance plan to donate an additional pair to youngsters in need throughout the five boroughs of New York City. To celebrate the new relationship, Team New Balance athlete Jenny Simpson, 4-time champion of the NYRR 5th Avenue Mile, participated in a running clinic with a NYRR Mighty Milers class at PS114 in the Bronx, showcasing the spirit of the long-term agreement.

Founded in 1958, New York Road Runners has grown from a local running club to the world’s premier community running organization, whose mission is to help and inspire people through running. NYRR’s commitment to New York City’s five boroughs features races, community events, youth running initiatives, school programs, and training resources that provide hundreds of thousands of people each year, from children to seniors, with the motivation, know-how, and opportunity to Run for Life. NYRR’s premier event, and the largest marathon in the world, is the TCS New York City Marathon. Held annually on the first Sunday in November, the race features 50,000 runners, from the world’s top professional athletes to a vast range of competitive, recreational, and charity runners. Tata Consultancy Services (TCS) is the Premier Partner of New York Road Runners. To learn more, visit www.nyrr.org.