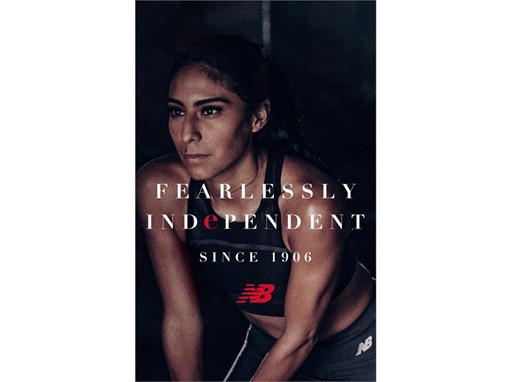 BOSTON – February 7, 2018 – Global athletic leader New Balance announces the launch of Fearlessly Independent Since 1906 – its new inspirational global brand communication platform that reflects the heritage and non-conventional values of the global sports company. The platform includes a new visual identity system with distinct typography and iconography across all of the brand’s global communication and distribution channels and will be brought to life to consumers for the first time through the integrated Declare Your Independence marketing campaign.

“At New Balance, we firmly believe that our marketing must be a reflection of our organizational values and realize our brand’s DNA through authentic content that inspires both individuality and confidence.  As a privately held company, New Balance has traditionally made purposeful choices like maintaining a limited portion of our domestic manufacturing that defy convention and demonstrate both courage and independence,” says Chris Davis, New Balance Vice President of Global Marketing.  “In all that we do, our goal is to lead with character, create product with unparalleled quality and innovation, and set new, elevated standards in our global communities.”

The Declare Your Independence campaign debuts February 7th and showcases the unique character of the brand through seven New Balance ambassadors including Francisco Lindor, Rose Lavelle, Paul Rabil, Jurgen Klopp, Brenda Martinez and PJ Ladd, illustrating how they define independence for themselves.  Available at newbalance.com and via the brand’s social and YouTube channels, the campaign includes long and short films that highlight how these world-class individuals have stood up to convention through their independent style, determination and unparalleled persona.

“Today’s society is often defined by conformist actions and we believe consumers are looking for authentic, real brands that defy convention,” says Davis.  “We want to recognize and celebrate the notion of individuality through true independents who are changing the game. Our goal is to inspire consumers across the globe to unleash the best version of themselves,” says Davis.
The campaign is being amplified via global media companies Bleacher Report, Refinery29 Uninterrupted and Vice, amongst others. These media outlets will deliver rich documentary-style films, compelling articles and social videos around New Balance athletes Francisco Lindor, Temba Bevuma, Brenda Martinez and Paul Rabil. These inspiring stories focus on how these top-tier athletes overcame challenges and defied standards to change their game.

The social elements of the campaign highlight the independent nature of New Balance athletes, inspire consumers to state how they declare independence from the expected, stand up to challenges ahead, and set themselves apart from the status quo using the hashtag #FearlesslyIndependent.

About New Balance
New Balance, headquartered in Boston, MA has the following mission: Demonstrating responsible leadership, we build global brands that athletes are proud to wear, associates are proud to create and communities are proud to host. Manufactured in the U.S. for over 75 years and representing a limited portion of our U.S. sales, New Balance Made U.S. is a premium collection that contains a domestic value of 70% or greater. New Balance owns five factories in New England and one in Flimby, U.K. New Balance employs more than 7,000 associates around the globe, and in 2016 reported worldwide sales of $3.8 billion. To learn more about New Balance, please visit www.newbalance.com and for the latest press information please visit http://newbalance.newsmarket.com.

Declare Your Style – Cleveland shortstop Francisco Lindor arrived in American at age 12 from Puerto Rico unable to speak English. Now a confident and charismatic All Star, Lindor’s never forgotten his Puerto Rican roots and remains true to his strength of character and unique sense of style — something he brings to everything he does.

Declare Your Drive –Paul Rabil is considered by some to be the #1 lacrosse player in the world. Deeply passionate about growing his sport, he is involved in the business of lacrosse as much as playing it; constantly growing it and doing everything he can both on and off the field to drive its future.

Declare Your Future – Dedicating herself to learning every aspect of the game, American soccer player Rose Lavelle made education of equal importance in her training.  Instead of dropping out of college to go pro, Lavelle kept her academics on par with her sport and conquered both.

Declare Your Character – Jurgen Klopp has always had soccer in his blood. After spending 15 years as a professional player, he found his true calling in inspiring others to greatness as the manager of one of the world’s most storied football clubs, Liverpool FC.

Declare Your Path – Middle-distance world medalist runner Brenda Martinez grew up with humble means in a California community.  Her passion started through a running club despite only having cut-off jeans and shoes too big for her feet.  Martinez hosts running camps for young girls to give them the chances she didn’t have growing up.

Declare Your Victory - PJ Ladd has been innovating in the world of skateboarding since he was 8 and growing up in Boston.  Despite long months of unfriendly skate weather, Ladd continued to practice under adverse conditions, using the inside of his father’s auto body garage for refuge.

Declare Your Craft - The film features a New Balance worker stitching an athletic shoe at the company’s Lawrence, MA factory as a nod to the brand’s long-standing commitment to maintaining a portion of its manufacturing in the United States.

*The anthem video’s soundtrack is by Los Angeles-based NVDES, a multi-genre art music project by Josh Ocean that creates songs through freeform creative jam sessions that allows each song to have its own unique elements.
###