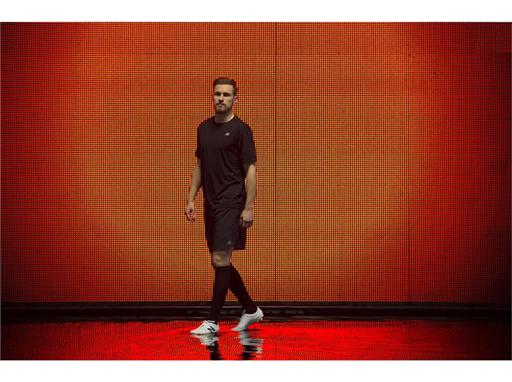 The New Balance film highlights the commitment it takes to become a better athlete and the never-ending drive to improve. It’s not about one victory, one run or one goal. It’s about every victory, every run and every goal. It emphasises how football is more than 90 minutes, more than 11 versus 11 and more than just winning – it’s the commitment to carry on, to not rest or ever take it easy.

Set against the backdrop of a giant LED screen, we see the players being put through their paces as graphics communicate how New Balance – and their athletes – are relentlessly driven to be better and go further, every minute of every session, every day of every season.

Director Marie Schuller – who previously filmed campaigns for a number of high profile fashion brands and retailers – gives the film its unique, highly graphic and stylized look. She says: “This film is all about striving to be better. The New Balance players each have immense talent but that alone is not enough, becoming a better athlete is the motivation that drives them on. Each scene aims to capture the relentless pursuit of excellence, the fact they never stop pushing to improve. Stylistically we set out to create a cool and contemporary film which was different to anything the category would do.”

The anthemic music track that accompanies the film and which exudes the high energy of the brand is an original composition by Chris Karloff from Black Onassis, a former member of the indie rock band Kasabian.

Kenny McCallum, Global Brand Manager for Football at New Balance says about the brand’s first football ad: “We want to communicate the essence and attitude of New Balance Football. The heart of the concept is how we – and our athletes – are relentlessly driven to be better. We are highly competitive, innovative and fearless and we place the player at the centre of everything we do. We want to show the stories and reality behind what we see on the pitch – the constant hard work our brand and players put in to be better.”

The first collection of New Balance boots will be available at retail from July 2015. The #NBFootball ad can be viewed on the New Balance Football YouTube channel at http://youtu.be/caMJWL4ceXw​.