New Balance Launches Letters to My Future Self Campaign 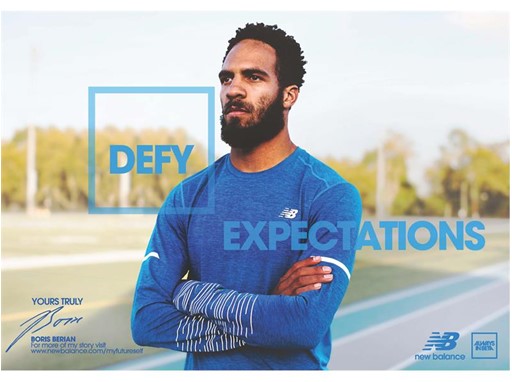 Global sports brand asks consumers “What would you tell yourself?”

BOSTON – January 17, 2017 – Global athletic leader New Balance kicks off 2017 with an inspirational campaign that highlights how the goals and values of athletes drive their decisions and guide their journey through letters written to their future selves that will be published on The Players’ Tribune, the new athlete-driven content platform. The campaign launch features Boris Berian, who went from a fast food line cook to an Olympic finalist and World champion runner in 18 months and Alexis Sablone, a female X Games Gold Medalist who is also a MIT graduate/architect.  The passion and drive of tennis champion Milos Raonic will be featured in the campaign starting February 13.

"Every New Year represents a new beginning, a new opportunity for self-improvement and presents that iconic moment for athletes and individuals around the world to redefine personal ambitions, motivations and sense of purpose,” says Chris Davis, New Balance Vice President of Global Marketing.  “At New Balance, our marketing is a reflection of our values, so we created the Letters to My Future Self campaign to showcase the true individuality, grit and unparalleled persona of our world class athletes. Through their own words, reflections and inner strength, they inspire athletes everywhere to unrelentingly pursue the best version of their future self.”

Through long and short form films available on newbalance.com and the brand’s You Tube channels, the campaign captures the written messages and goals of athletes that focus on who they want to be in the future.

Berian’s film captures his journey from fast food to fast finishes appearing in the Men’s 800 meter final in the Olympics this past summer. Boris worked as a line cook as recently as 18 months ago, but never gave up on his dream or himself despite the struggles he faced in school, financially and with training.

Sablone, a gifted skateboarder and architect, sees the world through a unique lens and fearlessly embraced that difference and made it her own which took her to the medal stand at the X games five times.

Raonic, a rising star in the global tennis circuit uses the fire to win as a competitive advantage on the court and off fueling his 140+ mph serves and inspiring the next generation of athletes.
Mini films on global athletes including runners Ciara Mageean and Tom Barr will highlight their aspirational stories through their own letters to their future selves.

“These films portray how overcoming obstacles both in sport and in life represent a transformative experience that can forever alter an athlete's journey and outlook for the future, says Davis.  “What you would say to your future self is a powerful realization of your fears, values, ambitions and the type of person you want to become.”

New Balance will offer a multi-dimensional “What would you tell yourself?” experience at newbalance.com where consumers can write their own letter to their future selves self about aspirations in sport and life and the brand will send it back to them in one year through a unique time capsule initiative.

The campaign will launch starting January 17th in the U.S., Canada, Japan, Europe, LATAM, New Zealand and Australia, followed by  Taiwan and Hong Kong on January 20 and China on February 24.  In the U.S., the campaign will also be featured on Vice Media.  Ace Content of NYC, handled the creative for the campaign and PGR managed the media for the US.

About New Balance:
New Balance, headquartered in Boston, MA has the following mission: Demonstrating responsible leadership, we build global brands that athletes are proud to wear, associates are proud to create and communities are proud to host. New Balance is the only major company to make or assemble more than 4 million pairs of athletic footwear per year in the USA, which represents a limited portion of our US sales.  Where the domestic value is at least 70%, we label our shoes Made in the USA. New Balance owns five factories in New England and one in Flimby, U.K. New Balance employs more than 5,000 associates around the globe, and in 2015 reported worldwide sales of $3.72 billion. To learn more about New Balance, please visit www.newbalance.com and for the latest press information please visit http://newbalance.newsmarket.com.

ABOUT THE PLAYERS’ TRIBUNE:
The Players’ Tribune is the first content platform created, curated and controlled by athletes, providing unique insight into the daily sports conversation. Founded by Derek Jeter, The Players’ Tribune publishes first-person content from athletes, bringing fans closer than ever to the games they love. More than 1,200 athletes have contributed to the platform through impactful and powerful long and short form stories, video series and podcasts. For more information visit www.theplayerstribune.com, or interact with the team on Facebook (www.facebook.com/theplayerstribune) and Twitter (@playerstribune).