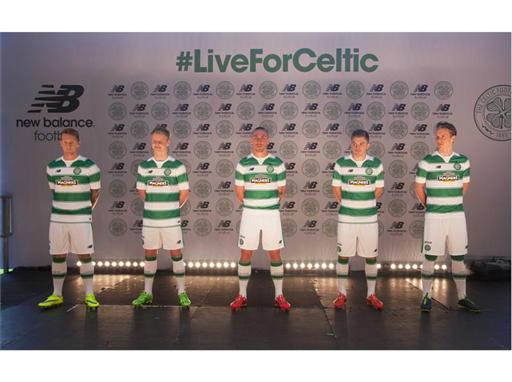 For over 100 years, the iconic green and white-hooped kit has been a symbol of passion and pride for the faithful supporters of Celtic FC. In the newly designed home kit, New Balance is maintaining the club’s illustrious traditions, while incorporating a modern twist. The kit is presented as part of a New Balance ‘Live For Celtic’ campaign, highlighting the passion all those associated with the Club have for it.

In keeping with the team’s tradition and identity, solid green hoops circle the bright white shirt, which are framed by finer hoop detailing to give the design additional depth. The clean sharp look is complimented by an integrated V-insert collar. Celtic’s rich heritage is also celebrated with the inclusion of club message “A Club like no other” to the inner back neck and an external Celtic cross sign off. The kit is completed with crisp white shorts and white socks with green hoops.

Celtic FC’s captain Scott Brown said, “All the players were excited to hear New Balance would be making next season’s kits and the designs were popular from the moment we saw them. We can’t wait to wear them on the pitch.”

The kit incorporates NB Dry, technology that helps keep the body cool and dry whilst being active. The moisture wicking fabric releases moisture away from the body, making it fast-drying and it is anatomically fitted to form around the player’s body shape for ease of movement. NB Flex technology, fiber construction that provides enhanced stretch for a less restrictive garment, is incorporated into the goalkeeper kit to help with motion and fit.

Celtic Chief Executive Peter Lawwell commented:  “The kit looks and feels modern; yet the traditions that bind this club and its supporters have been completely respected. We are delighted to enter this great new partnership with New Balance and we are confident our new kit will be a winner both on the pitch and with our fans.”

Richard Wright, General Manager of New Balance Football, said, “New Balance has big ambitions and we can learn a lot from one of Europe’s most prolific and successful clubs. Being able to design the home kit for Celtic FC and to include New Balance features NB Dry and NB Flex into the design; we know we have given the team all the tools they need to remain successful for years to come”.

In 2015, New Balance is bringing its expertise, passion, and innovation to the world’s greatest game, football.  New Balance Football takes an original approach to designing and developing product, focusing on the unique needs of the player and the game. This is reflected in the quality of the sponsorships it has secured, including an enviable line up of the some of the world’s great football clubs including Liverpool FC, Celtic FC, FC Porto, Sevilla FC, Stoke City and national football teams, Costa Rica and Panama as well a roster of top flight players who excel at the highest level of the game. For more information about New Balance Football, visit www.newbalance.com/football.  New Balance Football can be found on Facebook, Twitter, Instagram and YouTube.