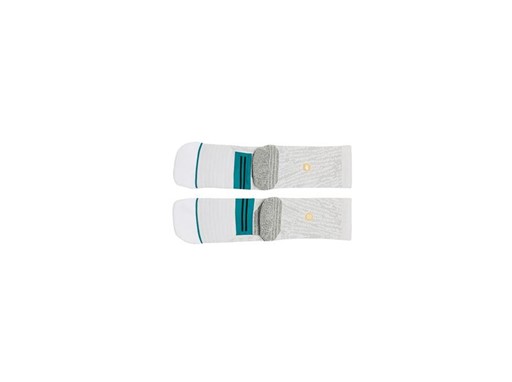 BOSTON, JUNE 16, 2017 – Inspired by the pursuit of being the GOAT (Greatest of All Time), the New Balance x Stance collab today expands to include the New Balance FuelCore Sonic, paired with coordinating Stance run socks. The GOAT inspiration is taken literally in the FuelCore Sonic’s white and grey textured upper and the playful goat-printed insoles. Metallic gold highlights and the words “All Time” in gold reference a first place medal, while a hint of Stance blue appears on the Boa® dial to tie back to the collaboration between the two brands. The Stance run socks also feature a white and grey textured pattern along with gold and blue accents, and are knit with a proprietary fiber blend, breathable integrated mesh and anatomically correct construction, engineered to keep each foot supported where it counts.

The “ALL TIME” pack is available starting today on NewBalance.com, Stance.com, and in select New Balance stores in men’s sizes 4-14. The price of $149.99 includes both the shoes and the socks.
The innovative New Balance x Stance collab launched earlier this month with the 997 and 1978 lifestyle shoes and coordinating socks, inspired by the Boston and San Clemente, CA roots of each brand. The collection will continue throughout 2017 with additional launches later this summer and fall.
The Boa® system features a dial to adjust the fit of the shoe with precision and allow for quick and easy release. A midfoot canopy and heel wrap create a truly customizable fit with a bootie construction.
To stay up-to-date on the collaborations coming this year from New Balance and Stance, follow @newbalance and @stancesocks on Instagram, and/or @newbalance and @stance on Twitter and Facebook.
#NewBalancexStance, #The ArtoftheKit, #StanceRun
@newbalance @stancesocks (IG)
@newbalance @stance (FB & Twitter)
###
ABOUT NEW BALANCE
New Balance, headquartered in Boston, MA has the following mission: Demonstrating responsible leadership, we build global brands that athletes are proud to wear, associates are proud to create and communities are proud to host. New Balance is the only major company to make or assemble more than 4 million pairs of athletic footwear per year in the USA, which represents a limited portion of our US sales. Where the domestic value is at least 70%, we label our shoes Made in the USA. New Balance owns five factories in New England and one in Flimby, U.K. New Balance employs more than 6,000 associates around the globe, and in 2016 reported worldwide sales of $3.8 billion. To learn more about New Balance, please visit www.newbalance.com and for the latest press information please visit http://newbalance.newsmarket.com.
ABOUT STANCE
Embracing “The Uncommon Thread” as its mantra, Stance turned one of the world’s most boring accessories into its most exciting in just a few short years. Stance’s founders saw a category that had been ignored, taken for granted, looked over, and dismissed. By breathing life into something that had been overlooked, Stance ignited a movement of art and self-expression that has drawn athletes, performers and iconic cultural influencers to the brand – a group called the ‘Punks & Poets.’ And by underpinning its creative roots with a relentless focus on technical innovation, Stance is now found in over 60 countries and has been named the Official Sock of the NBA and of Major League Baseball, where it is worn by all players on-court and on-field in every game. To learn more about Stance, visit www.stance.com and follow along @stancesocks on Instagram and @stance on Twitter and Facebook.