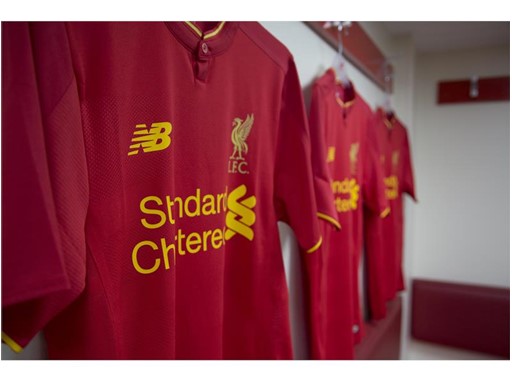 The shirt has been launched as part of the 2016/17 season ‘Made for Liverpool’ campaign which explores what it means to be a Liverpool FC fan. Each kit (home, away and third) in the range will feature words from some of Liverpool FC’s famous figureheads, each quote exemplifying the unique nature of the fan-base and the Club. The home shirt features a former Club Captain’s famous words, “There’s no noise like the Anfield noise” to the inner hem, paying homage to the special and renowned atmosphere of the stadium.

Richard Wright, General Manager of New Balance Football said: “When creating this kit, the R&D team analysed crucial football data and core body movement to produce a garment that has been engineered to perform at the highest level. From the highly breathable fabric to the seam-free construction and the moisture wicking NB Dry technology, this kit offers support in the areas that players need it most.”

The kit has been developed using NB Dry technology, a moisture wicking fabric that keeps players cool and dry whilst wicking sweat from the body, making it fast drying. It also features a gradiated mesh, which is engineered into the fabric to allow for improved air movement around the body compared to traditional fabrics.

The shirt’s design has been developed using the latest heat bonding technology. It features body mapping across zonal areas of the chest and reinforced bonded seams down the side panels and shoulders to increase comfort and reduce friction compared to traditional fabric constructions. Additionally the kit has a built-in, engineered lumber panel and tactical placement of Amber yellow cognitive recognition flashes which have been designed for easy identification of elements of the garment at rapid speed. Laser cut and bonded eyelets placed below the arms further aid airflow around the body.

The shirt design features a tipped short stand button polo collar, accented with Amber yellow to give the top a stylish look.

To commemorate the tragic events of Hillsborough, the 96 emblem, encased by the eternal flames sits at the nape of the neck.

The kit is completed by red shorts, with yellow logos and a white number and solid red socks, finished off with the yellow Liver bird crest. To offer added support to the ankle, the socks have built in comfort zones while the footbed has been developed with polypropylene to alleviate excess moisture when the foot makes contact with the boot.

The goalkeeper kit is constructed with engineered Flex fabric panels to offer a greater range of movement. These Flex zones are identified by contrast heat transfers. The Locust green design with black shoulder zones ensures the kit has a standout but stylish look, complementing the outfield kit design.

Jürgen Klopp, Liverpool FC’s Manager had nothing but admiration for the kit: “This team has the winning mentality and now, with this spectacular new home kit every player will look the part lighting up Anfield.”

New Balance Football takes an original approach to designing and developing product, focusing on the unique needs of the player and the game. This is reflected in the quality of the sponsorships it has secured, including an enviable line up of some of the world’s great football clubs including Liverpool FC, Celtic FC, FC Porto, Sevilla FC, Stoke City and national football teams, Costa Rica and Panama as well as a roster of top flight players who excel at the highest level of the game. For more information about New Balance Football, visit www.newbalance.com/football.  New Balance Football can be found on Facebook, Twitter, Instagram, Snapchat (NB.Football) and YouTube.

New Balance, headquartered in Boston, MA has the following mission: Demonstrating responsible leadership, we build global brands that athletes are proud to wear, associates are proud to create and communities are proud to host. New Balance is the only major company to make or assemble more than 4 million pairs of athletic footwear per year in the USA, which represents a limited portion of our US sales. Where the domestic value is at least 70%, we label our shoes Made in the USA. New Balance owns five factories in New England and one in Flimby, U.K. New Balance employs more than 5,000 associates around the globe, and in 2015 reported worldwide sales of $3.72 billion. To learn more about New Balance, please visit www.newbalance.com and for the latest press information please visit http://newbalance.newsmarket.com.