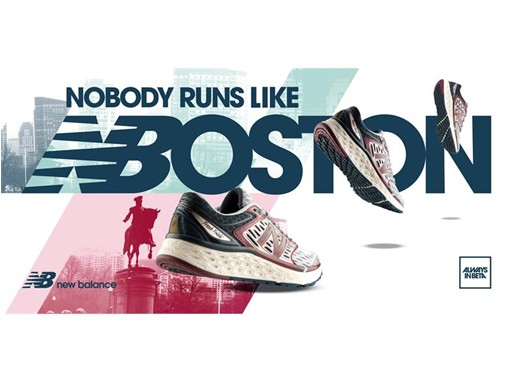 Global athletic leader New Balance today announces its popular “Nobody Runs Like Boston.” campaign will continue this spring with updated visuals, messaging and consumer experiences. The campaign highlights the brand’s running heritage that is synonymous with its hometown city of Boston. The campaign features Boston-themed limited edition footwear and apparel, out-of-home advertising and social media elements designed to motivate and engage metropolitan runners.

“Every April New Balance celebrates running with a campaign dedicated to the sport that highlights what it is like to live and train in our hometown,” said Jeff McAdams, Head of Global Running Marketing at New Balance.  “We are proud to be a Boston based company and the ‘Nobody Runs Like Boston.’ campaign reflects our experience as runners who train all winter for the spring racing season.”

New Balance is offering two limited edition Fresh Foam styles that are inspired by the collegiate legacy, training pride and thrill of victory shared by runners in Boston. These performance running styles include the Fresh Foam 1080 and the Fresh Foam Zante v2 in crimson, grey and navy colors. Gold detailing on the aglet signifies the accomplishment of finishing any race, while a heart on the sock liner marks Boston’s geographical location on the Massachusetts map. The Fresh Foam 1080 Boston gives runners a supremely cushioned underfoot feel in a premium neutral shoe that respects and maintains a runners’ need to engage with the ride itself. The award-winning Fresh Foam Zante v2 Boston maintains the coveted smooth, sleek ride runners fell in love with in the model’s first iteration, while finely tuning the geometries and overall fit so that runners can continue to pick up the pace and feel fast. The Limited Edition Fresh Foam 1080 Boston and Fresh Foam Zante v2 Boston retail for $164.95 and $114.95 respectively, and are available at select Boston-based retailers including New Balance Boston, Marathon Sports, The Tannery, the New Balance booth at the John Hancock Sports & Fitness Expo and online at www.newbalance.com.

In November, New Balance announced that it would be selling the world’s first 3D printed running shoe in connection with this Boston running campaign. On Friday, April 15th at 9AM consumers can finally purchase a pair of this extremely limited edition technology at the New Balance Experience store on Boylston or logon to www.newbalance.com. More details will be released on Monday, April 11th.

New Balance launches its out-of-home Boston takeover this  month with exterior back lit bus shelter wraps, in-race media including light pole banners, MBTA-station dominations and race barricades. For the third year, the New Balance campaign will blanket the Prudential Center with multiple interior suspended murals and an exterior banner at the Boylston Street Plaza construction entrance. The creative pays homage to the brand’s running heritage, the dedicated runners who train through harsh winter conditions and to the international running community that is drawn to the city every April.

Visitors to the New Balance booth at the John Hancock Sports & Fitness Expo will be able to purchase limited edition footwear and apparel from the spring 2016 collection, see a live mural appear as consumers interact with the brand on social media as well as take home an Instagram generated photo. The New Balance social media handle @NBRunning encourages fans to engage with the brand using the hashtag “#LikeBoston” while those visiting the Back Bay area between April 16th and April 18th can access a special New Balance filter on Snapchat.

New Balance branded initiatives with Boston-based brands the Lenox Hotel and boloco help round out the campaign. Leading up to the launch, New Balance continued their support of the annual “Last Long Run” with Marathon Sports where the brand provides one-way transportation to Route 135 in Ashland to runners while offering bag check and fuel along the route to Boylston Street.

The “Nobody Runs Like Boston.” campaign was developed by Nail Communications of Providence, RI who began working with New Balance in 2014. PGR of Boston handled media buying and planning.

New Balance, headquartered in Boston, MA has the following mission: Demonstrating responsible leadership, we build global brands that athletes are proud to wear, associates are proud to create and communities are proud to host. New Balance is the only major company to make or assemble more than 4 million pairs of athletic footwear per year in the USA, which represents a limited portion of our US sales. Where the domestic value is at least 70%, we label our shoes Made in the USA. New Balance owns five factories in New England and one in Flimby, U.K. New Balance employs more than 5,000 associates around the globe, and in 2015 reported worldwide sales of $3.72 billion. To learn more about New Balance, please visit www.newbalance.com and for the latest press information please visit New Balance Press Box.